Am I who I am, because of dyslexia?

When you walk into your dance space, leave every thought at the door. Forget about all your worries and stresses; lose your inhibitions and dance.

I dance to escape, express and energise.
One of the things I like to escape from is my own mind! I love to express through my body what I can not express in words. And I know that feeling energised makes me feel happy and accomplished.

I am creative and I ignore certain mathematical and scientific rules to reach my masterpiece. Where most people have to make time to do house chores, I have to make time to create something. From making wall art for Ezra's bed room, to painting pictures of flowers, to something as basic as homemade jam.

I panic with too much written detail. I recently visited Anne Franks House in Amsterdam and it was the perfect type of museum for me. Not too much to read, easily organised into rooms and they offered an audio tour which was easy to understand.

I struggle in social environments sometimes. I say inappropriate things, thinking that its OK to say them. I hate being Shhh'd.

My own mind tires me. I have to write things down in order to relax. I get frustrated when I haven't achieved everything on the list so I've now stopped making lists. My mind is always on the go, even while I sleep. I cant just sit and watch TV, I have to be knitting or doing something with my hands at the same time.


I remember all of these factors during my University years. I had a few social struggles and friendship issues, but I was there to get my dance degree and that was what mattered the most. When I was diagnosed, I told my friends I felt stupid. Thick was another word I used, but stupid that I had come so far in education and not known until now. This also made me angry and frustrated with teachers and left me questioning why they weren't trained to pick it up.
One memory was of one particular friend who had already been diagnosed quite a few years back and she took this comment personally. She thought I was saying SHE was thick, but this wasn't about her. She had the support already in place and had many years to get used to her condition.

School was also really tough for me. I was bullied there, as well as University and (now that I have started writing this) have come to the conclusion that it was because I was different. I thought I was sociable and outgoing, but I was also a bit quirky. I wanted my circle of friends to like me and so I did and said a lot to please them. Girls can be so mean, but I am a people-pleaser and it's in my nature to try and make people happy. I was an easy target, especially being was one of 5 children to get pulled out of class each week, for extra reading time!

And then there was dance.

I found this photo of my class from 2002 and I have very fond memories of this performance. These girls were amazingly supportive and were filled with talent. We were back stage and dressed as Geisha Girls, all in white so we could dance whilst a video was projected onto us. Wolverhampton University, Walsall Campus, Class 2000-2003.

Once I walked into that studio and stood in front of that mirror, I felt free. Creating dances, pushing my body to limits I didn't know I could reach and feeling the music only Contemporary teaches you how to feel. I also knew that 50% of my degree was bloody theory and I was rubbish at writing. Why couldn't they just let us do 100% practical?


I spent almost 3 years writing essays worth a maximum of a D. I couldn't understand why I never passed my written papers. I had to re do my dissertation to get a pass. Then just before my final semester, one teacher asked if I had been tested for Dyslexia. After a few tests and some guidance with my last ever essay, I was diagnosed with mild Dyslexia and bagged myself a B+ in my last assignment. They gave me £200 to get further help and I could have claimed more. I remember my friend got a laptop at the start of her degree, but I had nearly completed mine and wasn't planning on doing a masters. I pocketed the money and went on holiday with a friend a week before I graduated!

I had my cards read once. The white witch told me I was going to become a writer. I laughed and said 'I have just this year been diagnosed with Dyslexia so I doubt that. I choreograph dance routines, is that the same?' But I could tell that wasn't what she meant.

It's inspiring to know that dyslexia is common in well known people such as Stephen Spielberg, Pablo Picasso, Richard Branson, Agatha Christie and George Washington.

And Albert Einstein once said;

"Everybody is a genius. But if you judge a fish by it's ability to climb a tree, it will live it's whole life thinking that it's stupid".

Running a successful business and becoming a mum 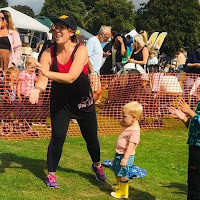 My dance company is in it's 9th year, which means SK Dance is going to be 10 next year! Wowsers!

After having my little boy back in September 2017, I wasn't actually sure if I would have a business to come back to. I found some wonderful teachers to run my classes in my absence and was just hoping I would break even during that time. My maternity came to an end in April 2018 and I was already straight back to it. 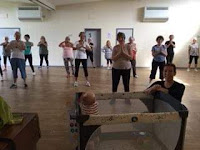 I had my first wedding couple booked in when Ezra was 5 weeks old and I took him to their house for their sessions. Surrounded by a dog, and two cats there was me, swinging my baby in his car seat and working with this very sweet and understanding couple. I managed to create a fun, upbeat and showstopper style routine for their first dance. A wedding first dance teacher is one of my favourite jobs. I just love creating bespoke routines, personalised for each individual couple.
My classes came back slowly, after 3 months I got back to my Zumba Fitness and by 6 months I had returned to Zumba Gold and Zumba seated. I had even managed to pick up a few extra sessions where I had either found childcare for, or took baby with me!
I was determined to continue running the business as best I could, as I knew the competition around me in the area was good. That fear of missing out and losing my loyal customers if I had stayed away too long, was unbearable. I had spend 6 years building this baby up, I wasn't going to lose it. I knew it was going to be tough and although my new baby was more important, I had decided to manage both of them. 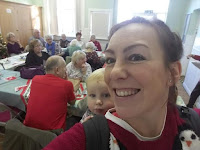 My clients embraced the experience, as did I. From timing a nap in the pushchair, to dancing with him in the sling and finally playing in the travel cot, this poor kid was learning to dance, whether he liked it or not. However, knowing it wasn't going to last forever, they were all very supportive and loved having him in the class.

Eventually, it become more about my child and his well being, than it did about me and mine......or them and theirs. He had taken all their attention and mine and after a whole 12 months, he was ready for more time with the childminder.....and so was I.
That was 8 months ago and I thoroughly miss him. BUT....as a dance teacher, I have my identity back. I have managed to continue most of the sessions and create new ones. I can now focus on each dancer in the room and they can focus on me! Every now and again I do still have to take him and its wonderful to see their faces. Seeing their reaction to him is heart warming and he acts so natural within that environment.
He has some great moves and is very sociable, which I love, but would I do it again????
- January 31, 2020 1 comment:

Am I who I am, because of dyslexia?

When you walk into your dance space, leave every thought at the door. Forget about all your worries and stresses; lose your inhibitions and...